Nation gets behind Edoardo as he strives to save Scotland's history

Two weeks into his mammoth 500 mile walk across Scotland, Edoardo Bedin is today on the isle of Arran shining a light on Brodick Castle, one of many closed historic properties across Scotland.

One of the most significant parts of his five week journey so far has been the people he has met.

He has been bowled over by the generosity and support of the Scottish people he has encountered along the way, saying "what amazing people the Scots are!"

As he has passed by, with his bunting and lantern hanging from his rucksack, and with his National Trust For Scotland (NTS) umbrella in hand, businesses have fed him pizza for lunch, cake for afternoon tea, cookies for snacks, and lasagna for supper!

Taxi drivers have given him free lifts to his start points, people have invited him into their gardens to rest as he walked past, he's been rescued from torrential rainstorms and some people have even done his laundry!

Builders and cyclists have given him directions and donated to the cause, and construction workers near Airdrie offered him beer and brought joy to his day when they followed the Facebook page.

Others have hosted welcome parties for him at the properties he is walking to. 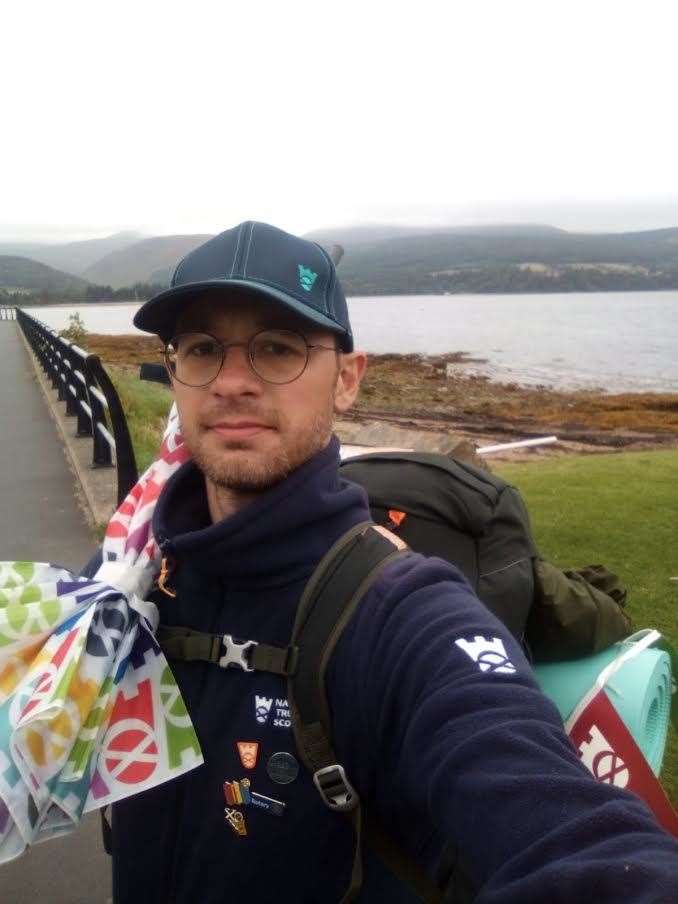 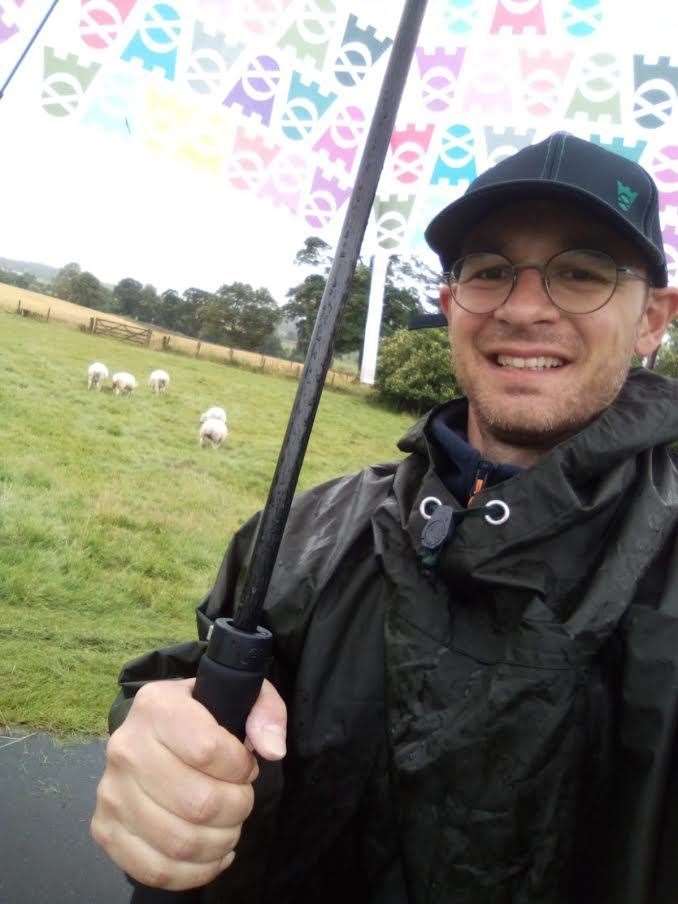 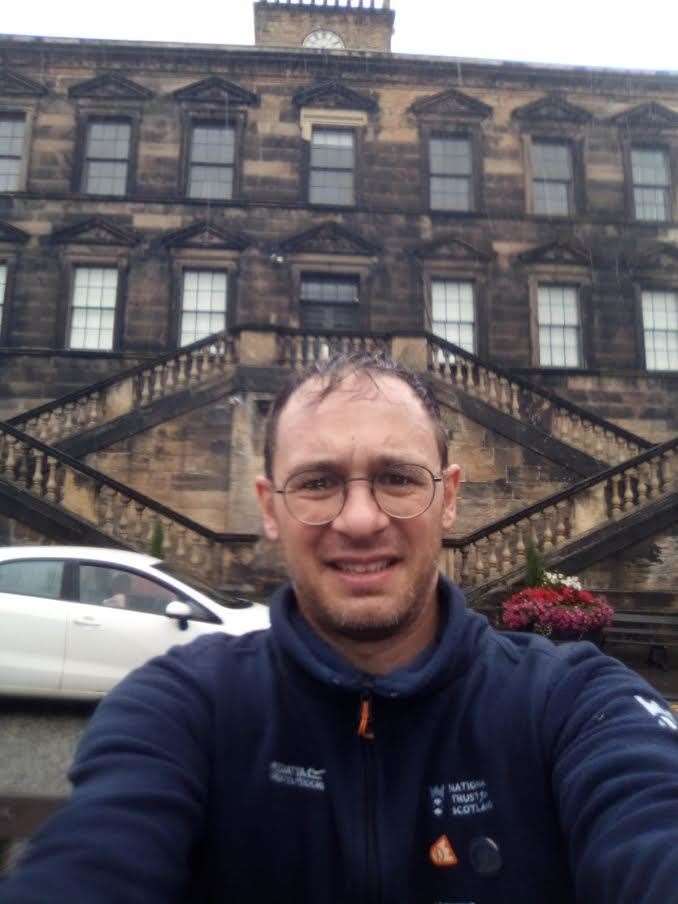 His arrivals at these closed historic properties have been cause for celebration as staff and volunteers alike delight in welcoming him, since they are unable to welcome the public due to the COVID crisis.

He has been marching out across Scotland to raise awareness of the jeopardy of the country's heritage resulting from closures due to the COVID crisis, and he's raising money along the way to try to open doors sooner.

Archaeologist and historian Edoardo is currently a furloughed NTS employee and he and hundreds of his colleagues will find out if they are being made redundant in the next few weeks.

With the properties closed there is no income to pay them to work at these precious places.

He is visiting 23 closed heritage properties on his road-pounding trip, to draw attention to their closure and to raise money to help reopen them.

He has walked to 11 properties so far, and said: "History explains where we've been, and it guides where we are going."

Supporters have hosted him overnight in anything from a summer house, to a tent in their garden, and even hotels have offered him complimentary hospitality.

The network of Rotary clubs across the country have really stepped up to help their fellow Rotarian and have provided very generous support and overnight stays for over half the trip so far, with more to come along the way in the later legs of the journey.

He was even interviewed at length, on the roadside for the TV, whilst enroute from Carnoustie to Dundee!

This Hitting The Road For The Love Of Scotland epic challenge started two weeks ago and Edoardo has so far clocked up 360km so far of his 800km total. 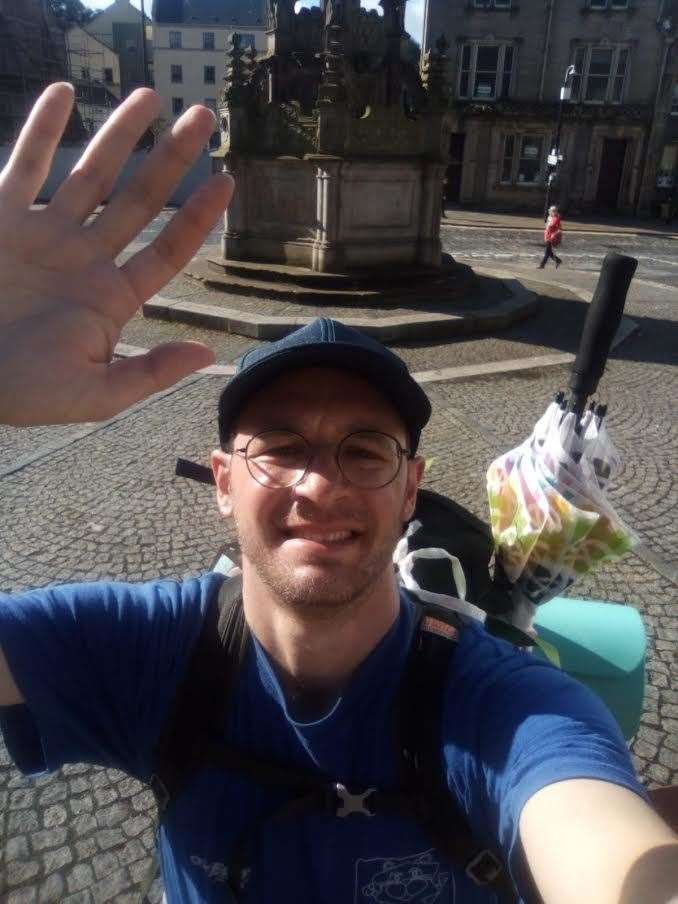 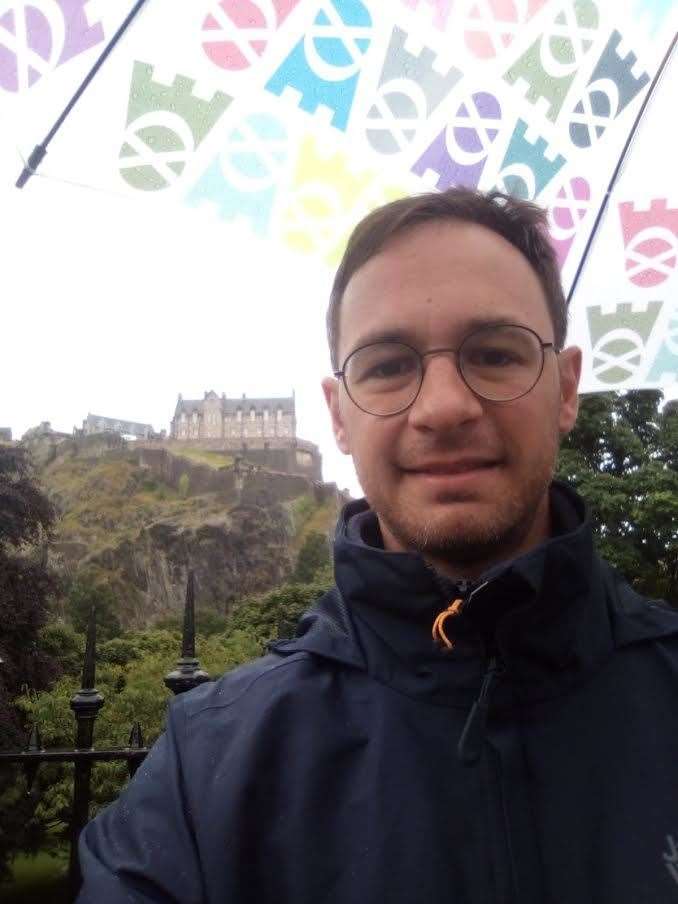 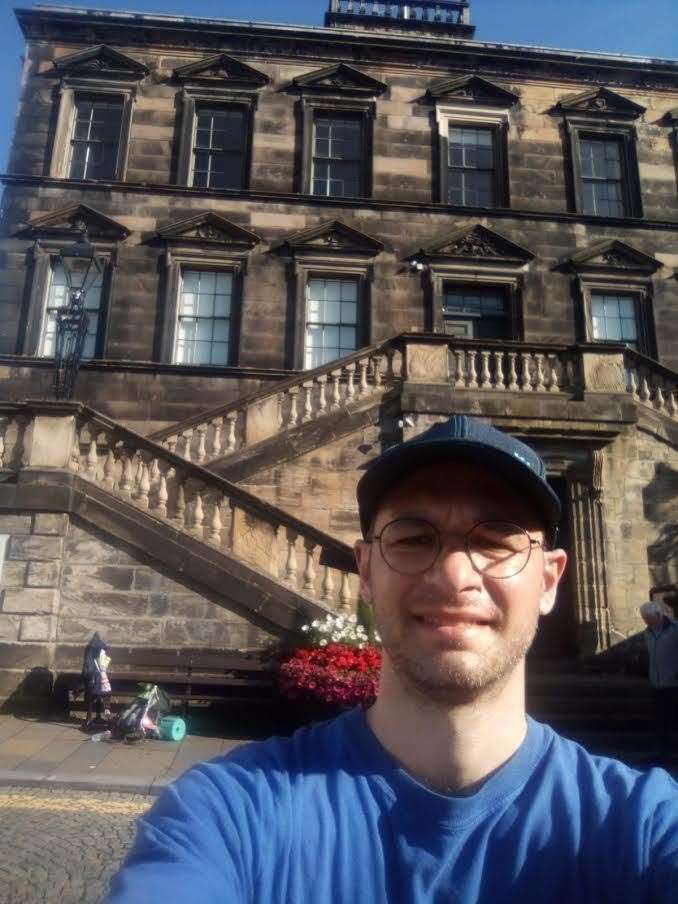 Not a practiced hiker Edoardo has found his fitness has improved, and around the one week of his constant long distance walking he was pleased to announce he no longer had pains in his legs when he stopped for a quick break and that the four or five hour recovery time for his legs each evening was lessening as he got fitter.

Now two weeks in, he is tired at the end of each day but he is bouncing along the road and said: "When I take off my heavy backpack I feel as though I could fly!"

Having walked through so many miles of Scotland's beautiful countryside from Aberdeenshire to Edinburgh, Glasgow and over to Arran, he said: "The beauty of Scotland's scenery is immense.

"I'm loving all of this - the geography, the views, the people...this is a country worth this walk.”

Meeting people and having them walk with him for a while is a real morale booster for Edoardo, so if you see him feel free to join him!

So many encouraging heroes have joined Edoardo along the way, from day one when the first person to come across this intrepid trekker and to Hit The Road with him was Mark from near Banchory, who kindly pointed out a shortcut too!

Furloughed NTS staff, NTS Volunteers and Rotarians have all strode out alongside him, and a couple on a coastal path in Fife taught him Swahili!

Families have joined him, senior citizens too, and Danny, who walks with crutches, joined Edoardo just west of Paisley with his dog Misty.

There have been many more besides, all very delighted to meet Edoardo, to hear about what he is doing and to keep him company for a while, and this is only Day 14 of Edoardo's 34 day challenge. 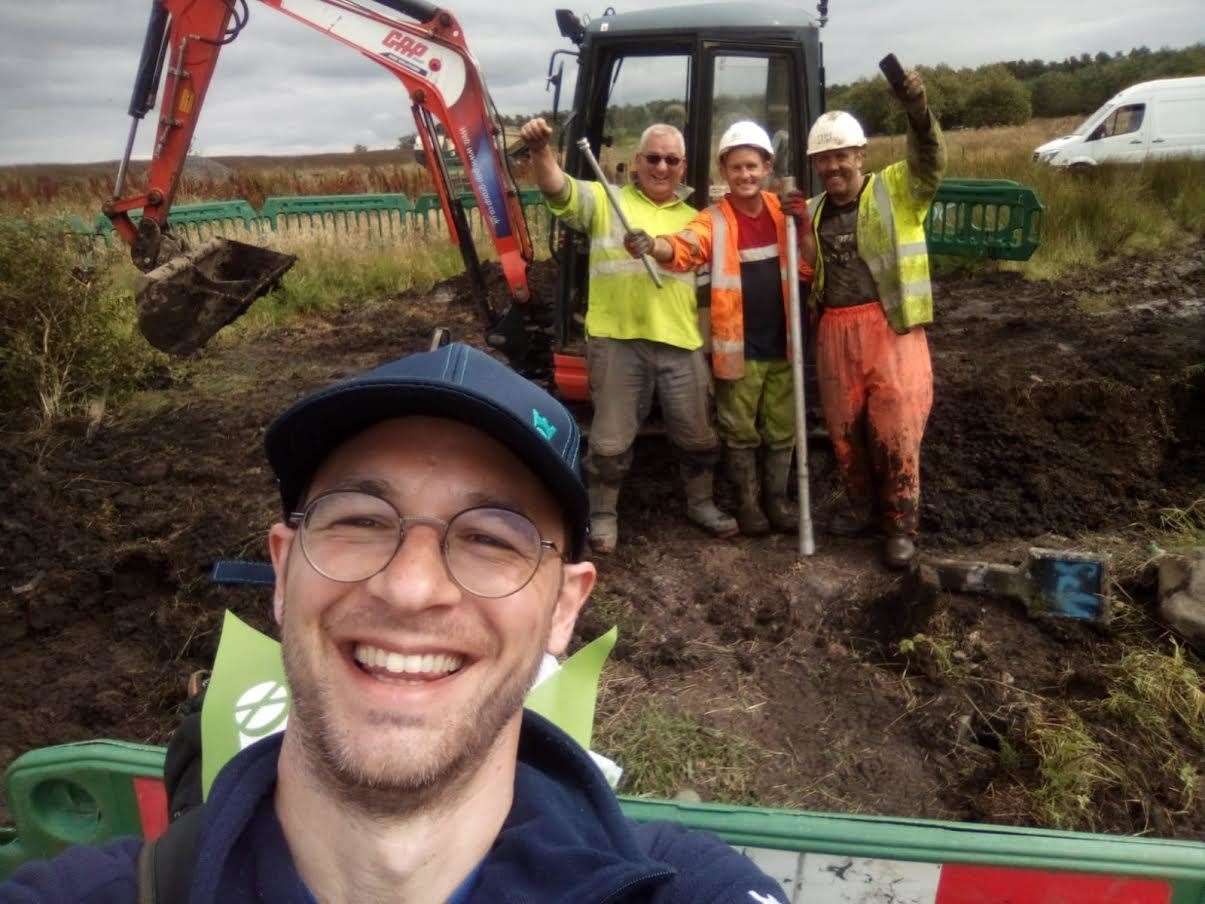 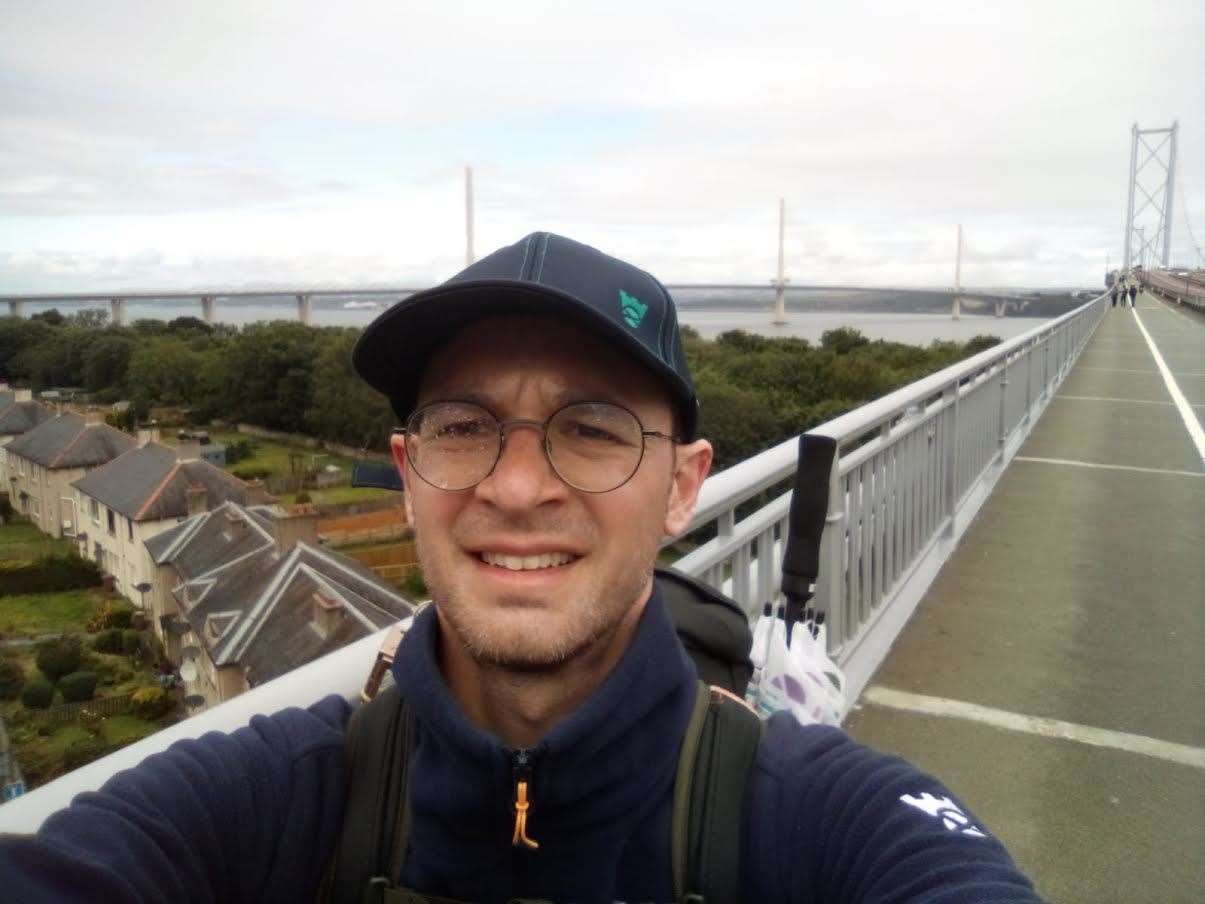 His next walking companion is Caroline Borwick, one of the trustees on the NTS Board of Trustees.

Being a walker herself, she is looking forward to joining Edoardo for a few miles to support his endeavours when he heads back to Glasgow.

Edoardo is walking for hundreds of his colleagues, all in the same position as him, all at risk of redundancy, as well as for all those NTS employees who never stopped working during this pandemic, all of them striving to save the NTS and Scotland's heritage, and for the volunteers who just want to get back into the buildings and share what they love about them with the public again.

He is also spurred on by his mission to highlight the beauty and importance of what the NTS has to offer and what it has to protect and his passion for heritage and its value, now and in the future, is his driving force, helping him to put one foot in front of the other.

After returning to the mainland tomorrow he'll be walking to Glasgow and the central belt to highlight three more closed properties and then make his way back north again to Aberdeenshire, visiting the remaining eight precious sites before his homecoming at Haddo House on Sunday August 30.

You can give your support to help re-open the doors so that all the nation's treasures and stories can be shared again, on Edoardo's charity fundraising page. 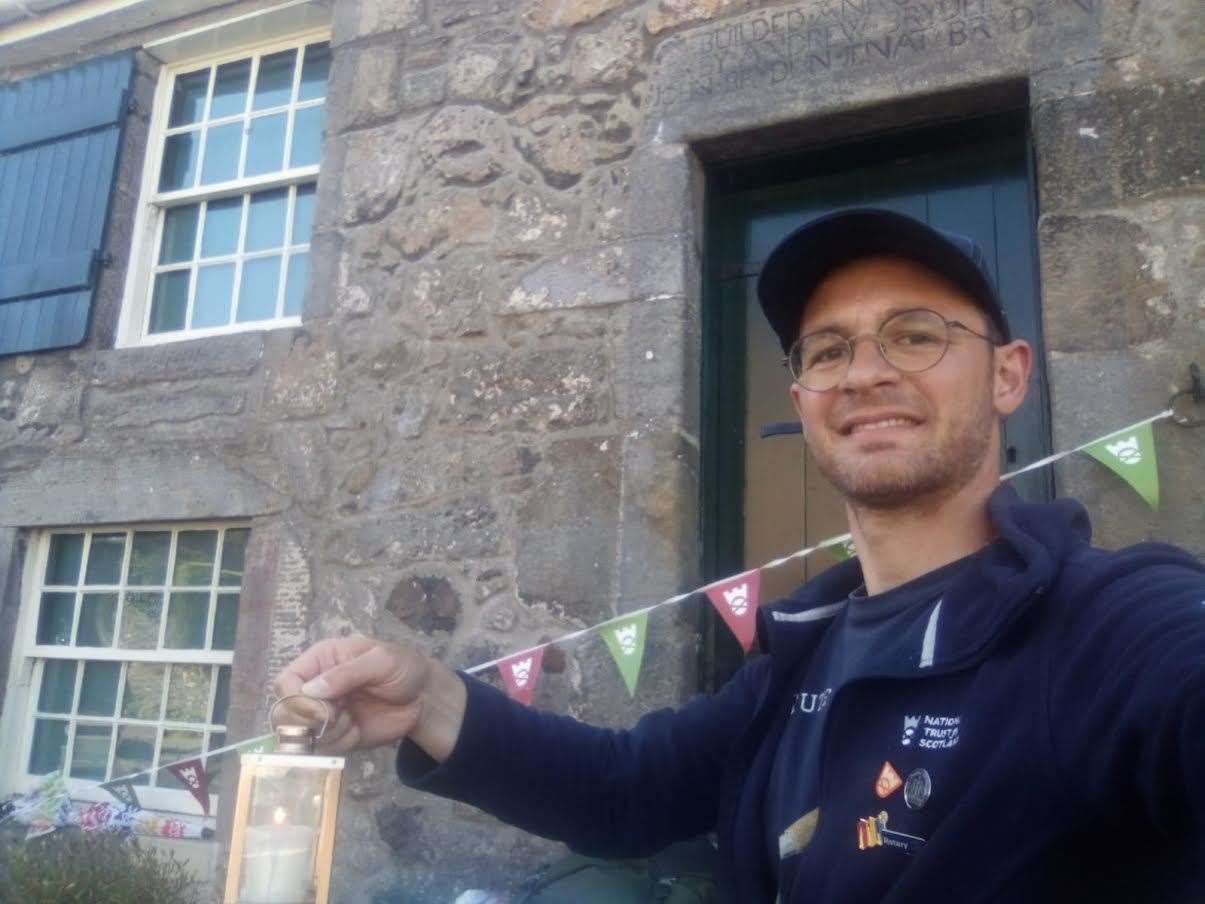 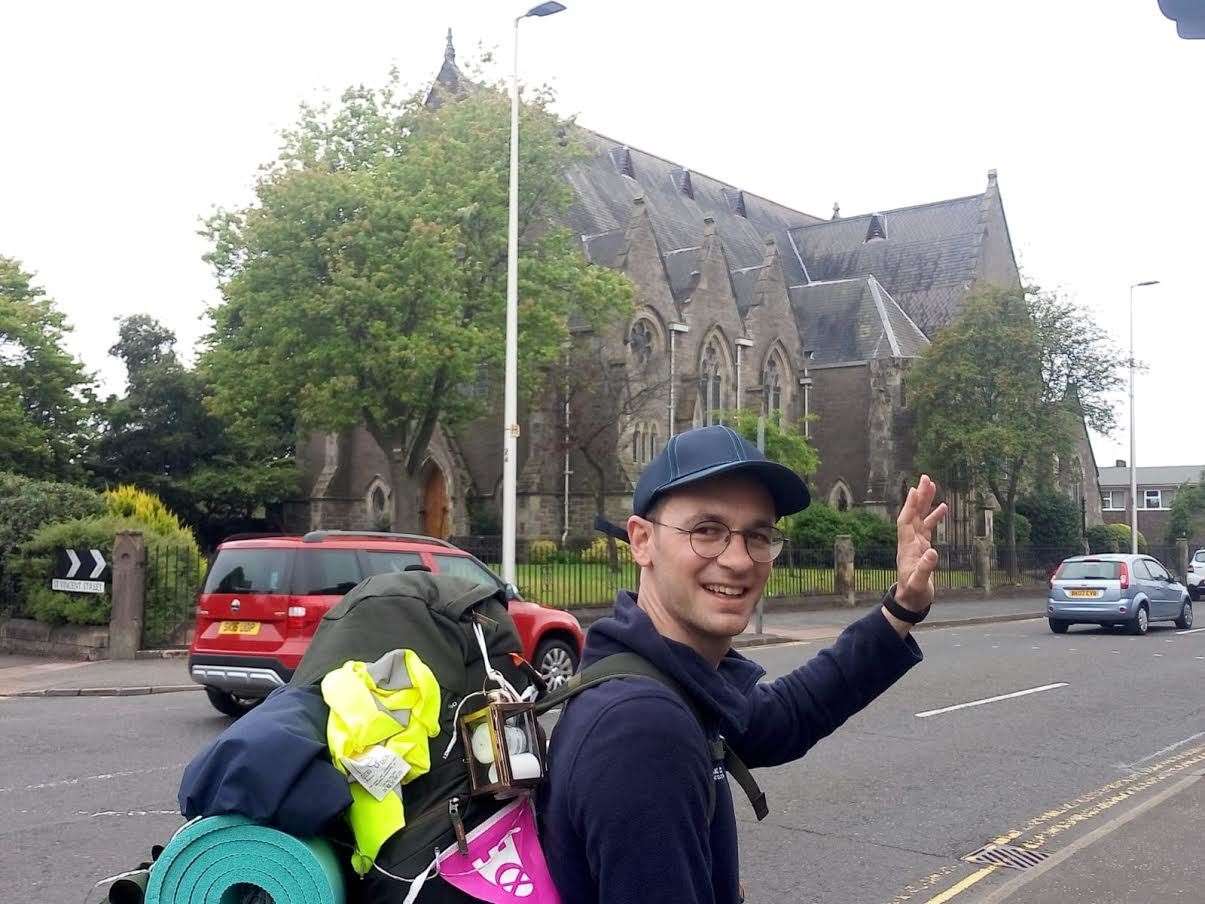 If you would like to cheer on Edoardo, you can find him:

August 11 - Ferry back to Ardrossan, then walk to Stewarton.

August 19 - Hill Of Tarvit to Dundee.

August 30 - Peth of Minnonie to Haddo House via Pitmedden Garden.