ACCORDING to Mr Yahoo a currant is a specific kind of berry. 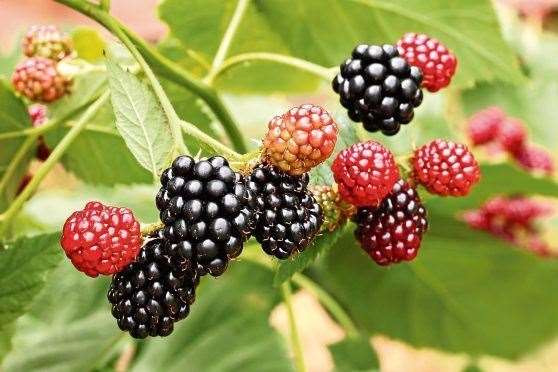 So therefore when people south of the border describe a fruit as a "blackberry", we might, as a tease, ask "which one?". I suspect we all know they really mean a bramble.

The whole issue of fruits and their naming is a complex one. There won't be a week in our household without a tomato on the table. But most people would suggest that's a vegetable. And indeed the US Supreme Court ruled in 1893 that it is. Biologists continue to hold the view that it's a fruit. As are cucumbers, marrows and many other 'vegetables'.

The 1893 decision is a perfect example of imperfect law.

But it doesn't stand alone.

Four years later Indiana considered a "Pi Bill" at the behest of Taylor Record. This Bill sought to express in law the squaring of the circle and hence, by implication, define Pi as a Rational Number. That's our everyday, plain vanilla numbers, with which we are all familiar.

Pi is not a Rational Number. Neither is it an Imaginary Number which is a number derived by multiplying a Rational Number by the square root of minus one. No, it is a Transcendental Number. They live in the cracks between our familiar numbers.

Confused? That's just fine. You will be in a substantial majority.

The bottom line is that the names we give to things can be a source of considerable confusion. A grapefruit may be a fruit but has never been near a grape in its genesis. A blackberry (English usage) is far from being the only black berry. A gooseberry was created without the intervention of any fowl.

For my part, confusion starts right with my name. If I go to the Scotland's People web site (https://www.scotlandspeople.gov.uk/) and put in my name, Stewart Stevenson, you will get 588 results. That's from 1855 up to about yesterday. It has databases of Scotland's Births, Marriages, Deaths, Valuation Rolls and much else. Examination of the detail will reveal that I do not appear on their list, despite my birth having been registered at the Haymarket Registry Office in Edinburgh in 1946.

Like nearly 20 per cent of the population who have three or more forenames, I have three and Stewart is the third; too many computer systems are blind to the correct use of more complex names.

There is no legal maximum for the length of the name you can use to register a birth. In practice, Registers of Scotland, last time I asked, had computer systems that could accept surnames up to fifty characters long and had 200 characters for recording as many of these as would fit. If your choice exceeds these limits, can't imagine many would, I have been told that they have a manual backup system.

But the website has much stricter limits for name lengths. My 'Stewart' gets abbreviated to 'S'. Hence the computer search fails to find me.

But that's far from the only system that lets down the 20 per cent of 'three or morers' like me.

HMRC refuses to send a tax return with my proper name on it. And given that the missing forename is the one by which I am commonly known, I periodically contemplate asserting that there is no one of the name they choose to use, at my address. But the tax ladies and gentleman have previously pointed out to me that I retain liability to pay even if I am sent no form at all. I posted my 2019-20 form off recently.

Late update: Three minutes after writing the above, our postie arrived with HMRC's response to my submission. And, yes, I owe them money – pretty much what I calculated.

For a number of years, Parliament employed a contractor who could only put up to two initials on our payslips. I sent them back as not being for me. Eventually, they stopped sending them. Didn't matter much as they kept on making the payments. The new payroll system is much better.

My bank can get my name correct on my debit cards but only accommodate two initials on my MasterCard.

DVLA get it half right by shortening my last forename to an initial. But in calculating my licence identity code, they ignore the last bit of my name.

The Passport Office is much more forgiving and has always got my name correct. But their error is to use the English rather than the Scottish coat of arms on the cover. Nemo me impune lacessit.

The Stuart dynasty also suffered, but not at the hands of cognomen terrorists, rather at the absence of a 'w' in the French alphabet. When I worked at Bank of Scotland, the strict name was The Governor and Company of Adventurers of the Bank of Scotland – you can see why it was shortened, we owned 10 per cent of Banque Worms in France. I always imagined Worms was a place, but I now know it was the surname of the founder. He was not French.

The point is that when Mary of Guise took her infant daughter, Mary Stewart – later Mary Queen of Scots, to France for safety, they had to dispense with the 'w' and she became Mary Stuart. So if your name is spelt Stuart, you are or aspire to, royalty. My spelling is from a clan the many of whom are, and were, travelling folk.

In my family, my mother and father and my sister, all have three forenames. Only my brother escaped with two. But say 'Stewart' at a family gathering and very many heads will come up. My siblings and I all have it.

Phonetically it can be misheard and occasionally misread. For quite a long time my name was clearly next to Struan Stevenson MEP's name in many a journalist's list of telephone numbers on their phone. On more than one occasion, it was only halfway through an interview that the caller twigged that he was talking to Stewart not Struan. Apparently, the former MEP had exactly the same experience in reverse.

But if we want to find spelling diversity within a family, it is to my spouse's Gemlo ancestors from Arbroath we need to go. I have found 13 spellings so far. Even to the extent of one death certificate spelling the deceased's surname one way, the father's name another and the son who was registering the death a third way.

And I will continue to ask for all three of my forenames to be on anything that purports to record my name.

I may explain on another occasion why I initial things as 'ZS'.