THE Covid-19 pandemic and the months of lockdown have forced organisations of all descriptions to adapt to the new reality facing them. 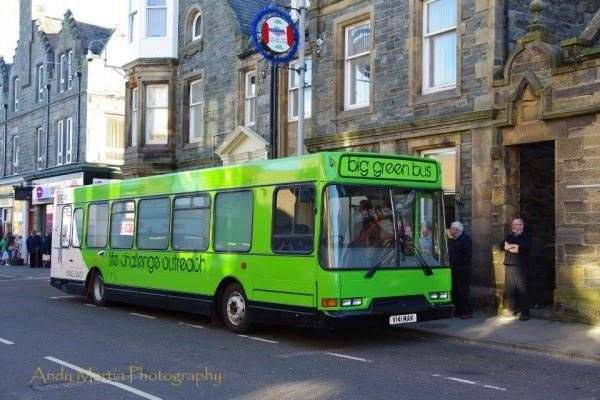 One of those forced to exercise ingenuity to help reach out to some of society's most vulnerable is a Buckie church's drop-in service for addicts.

Over the last eight years Buckie Riverside Church's Big Green Bus has been a regular feature every week just off Shanks Lane providing a haven for those struggling with addictions to come and have a cup of tea, a chat and, in some cases, eventually seek rehab, all away from the prying eyes of the wider world.

However, lockdown turned this outreach upside down, as Riverside's Pastor John Coppard explained.

"Lockdown meant we had to stop using the bus which did cause a lot of anxiety among many of the people we try to help.

"We had to get it across early on that we hadn't abandoned them so we came up with the idea of offering a confidential phone drop-in service. It means they can still talk to us, there's a friendly voice there for them, they're not alone.

"It's not the same as the bus, of course, but in the circumstances it's a lot better than nothing.

"The bus has been vital in reaching out to people with addiction difficulties. Getting on a bus is a lot easier for most of these folk, anonymity and discretion are a big part of the service. We've found over the years a lot of people will watch us and check us out first before deciding to come aboard.

"They can come on board and no-one can see them. In the early days we did try taking the bus to the centre of Buckie but that was a bit too open, too many people could potentially see who was getting on.

"Basically, we see two types of people coming to us. Firstly, there're those who are dependent, mainly drugs and/or alcohol, and who need rehab. Then there are those who are addicted but don't see themselves as dependent.

"Some folk we've been seeing for years. The important thing is, though, that those who come to us, whether for a short or a long time, trust us."

The outreach has had its successes, with some – around 14 or so to date – making it to rehab and out the other side, lives plucked from a rut of waste and despair.

Pastor Coppard added: "I've always said that if we make a difference, save just one life, then it's all worth it.

Anyone who would like to contact Pastor Coppard in confidence regarding dependency or addiction issues can do so by phoning the church on (01542) 833923 and leave a message or email lifechallenge@riversidechristianchurch.co.uk

The outreach service can also be found on Facebook atwww.facebook.com/LifeChallengeOutreach

Away from the outreach, there have been testing times for the church in general with regular services and other activities shut down since March.

He said: "It took a while to adapt and the biggest challenge for me was adapting to and keepign up with the technology.

"We've got online services on Facebook and YouTube, which look likely to continue after lockdown ends. Another sucessful innovation has been the online Coffee with Pastors slot, which began when Colin Murray and myself interviewed each other. it proved so successful – much to our surprise, I have to say – that we decided to ask a guest on each week to interview.

"It previously went online on a Thursday but we've changed that to a Friday. The reaction has been amazing.

"On the pastoral side, we've held prayer meetings over using the conferencing app Zoom and I've spent a lot of time on the phone, especially to people who have been shielding. Issues such as mental health and depression have been exacerbated by lockdown so I try to keep an eye on people as closely as I can.

"Like a lot of society, the church is going to change the way we do a lot of things because of the lockdown.

While lockdown regulations are easing Pastor Coppard noted that it would be a while before services resumed, with some test runs showing that the rules as they stand were too restrictive to make communal worship viable. Many members of the congregation, especially those with health conditions, also indicated that they did not feel comfortable or confident venturing out into such a situation at present.

The food larder which Riverside had been running prior to lockdown has been redistributed to the food bank run by the local Salvation army and to Buckie Kindness Group.